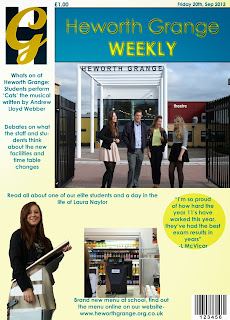 When we were given the task to create the magazine cover and contents page, we had to go around the school in a small group of people and take any photographs which portrayed a day in the life at Heworth Grange School. When we went around, we managed to get photos of a few of us (in our group) posing to be able to create a realistic image as well as being a perfect shot of the types of images we were looking for and then images of real life situations of students learning and being casual around school.

When I started on my magazine, I decided that I would have a yellow background and blue writing to contrast with the school logo. After I used these colours, I decided to use them throughout and keep these as my colour scheme. Also another positive factor about using these two colours is that the blue stands out from the yellow meaning that, not only will they be bright and attractive, but they will stand out and make it easy for the readers to see what is written clearly. For the main image on the cover of my magazine, I used an image of four 6th form students outside of the school gates with the school sign and entrance in the background to show the readers the brand new design and building of the school, and also to show that the image hasn't been take anywhere random, but actually outside of the school. I thought by keeping the main image at a normal size so that it's eye catching but not taking up the entire page. Then I used a medium close up image of one of my friends in 6th form, to show the dress code for 6th form and also I had an idea of putting an image of her on the front cover and then to be able to write a section on the front cover of 'a day in the life of Laura Naylor'. On the magazine cover, I applied the common conventions of using a barcode on the bottom corner of the magazine, and also I used the date and the price of the magazine on the top of the magazine cover too. On my magazine I used a bubble (in a darker yellow than what my background colour is) to make the writing that I have inside of it stand out more because it makes the writing look darker than what is actually is, meaning it's more eye catching to the audience and also shows that the writing inside the bubble is important and has been made to stand out for a meaning.

If I were to do my magazine cover again, I would fill the space more usefully, because there is a lot of empty space on the magazine cover. Also on the image that I have used of the school canteen (to advertise the new school menu available) I didn't crop the image properly and there is a lot of wobbly lines on the outside of it which makes it look untidy. Finally I would try and use more skills on Photoshop when I'm adding text into it, as when I was writing I didn't realise that some of the words were badly spelled and some of the writing had disappeared, but since I have been using Photoshop more frequently, I have started to learn more skills and will be able to correct these mistakes the next time I come to create a magazine cover.
Posted by Unknown at 02:17

Email ThisBlogThis!Share to TwitterShare to FacebookShare to Pinterest
Labels: 2, Finished